A semiconductor cascade laser developed at the Warsaw laboratory of Łukasiewicz – Institute of Microelectronics and Photonics can detect trace amounts of chemicals, such as methane in mines, or monitor glucose levels in the body. Poland has thus gained its own cascade laser technology. and Łukasiewicz – IMiF is among a small number of world laboratories that can produce such devices.

Since 2005, scientists at Lukasiewicz – IMiF have been researching photonic instruments that use a range of radiation called mid-infrared. The radiation – invisible to the human eye – surrounds us from all sides, as it is emitted by objects around us. The phenomenon of radiation emitted by objects of a certain temperature (known as thermal or thermal radiation) has been used, for example, in non-contact thermometers. The properties of infrared light are different from those of visible light, and many materials transparent to visible light are completely opaque in the infrared range, such as glass.

What is a quantum cascade laser?

In science, functioning as QCL (Quantum Cascade Laser) is a type of unipolar semiconductor laser, emitting radiation in the mid- to far-infrared range. The radiation source is electrons, which relax between subbands in the conduction band emitting photons. Only electrons are involved in the emission of photons – hence the term unipolar, as opposed to bipolar semiconductor lasers, in which emission occurs by recombination of electrons with holes.

The first QCLs, demonstrated at Lukasiewicz-IMiF in 2009, were made of gallium arsenide and gallium alumino-arsenide (GaAs/AlGaAs). They emitted pulses of infrared radiation with a wavelength of 9 micrometers. At room temperature, their power reached tens of milliwatts, and under cryogenic cooling conditions – five watts.

The lasers currently being developed at Lukasiewicz – IMiF enable the construction of portable detectors to detect trace amounts of chemical substances, such as methane in mines or dangerous gases in the chemical industry. In medicine, cascade lasers can detect disease markers in exhaled air, or monitor glucose levels in the body.

Until recently, conducting this type of research required access to sophisticated apparatus, and with the need for this light source, the choice of radiation sources was severely limited. The breakthrough came with the development of a unique and very small semiconductor cascade laser. Its typical dimensions are 2-4 mm long and 0.5 mm wide, which is about the size of a mosquito. Although the QCL requires power and cooling, of course, it has already become possible to construct measurement systems that have shrunk to the size of a suitcase. The option of battery power makes these instruments very versatile sources of infrared radiation.

In medical diagnostics, the QCL can be used to determine markers of various diseases, such as asthma in exhaled air or glucose levels in the body without the need to puncture the skin, by analyzing the absorption of radiation by glucose through a probe on the patient’s skin. It is also possible to detect viruses in a room. Of course, any of these activities can be performed thanks to optoelectronic systems using either lasers or light-emitting diodes (LEDs – that’s disinfection; UV diodes are great for destroying germs and are already in commercial use).

A graduate of the Faculty of Physics at the Warsaw University of Technology. He has been working at Lukasiewicz – IMiF since 2004. Since the beginning, he has been associated with the topics of semiconductor lasers, optical spectroscopy and optoelectronics. In my scientific work, I have participated in many national and international R&D projects on the subject of semiconductor lasers.

The Infrared Photonics Research Group functioning at Lukasiewicz – IMiF carries out R&D work aimed at maintaining and strengthening the team’s leading position in the field of optoelectronics and photonics in the mid- and far-infrared. Regardless of the implementation of basic research and publication of results, the Group’s goal is to develop and implement innovative solutions and technologies for domestic entrepreneurs in the field of optoelectronics and optical systems.

This article on cascade laser technology was written by Agnieszka Kubasik and originally published on tek.info.pl [PODCAST] Oxford in Wroclaw. How can the world’s science come to Poland? Lukasiewicz at Warsaw Industry Week. Learn about our solutions for modern industry 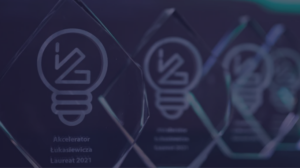